i. this is going to be painful ermeneutics

With Call Me By Your Name, I have felt overwhelmed twice: the first time in the paralysis of its final credits, the second time trying to make sense of how I felt, and getting more and more dazzled as I read all the insightful reviews out there on the internet.

I have later learned that this peculiar feeling has been defined ‘the swoon’ by the books’ fans.

I knew straight away I needed to get my opinion out there too, as I believed it would act as a catharsis and quieten that SOMETHING that the film experience had awakened in me. Dark matter, for all I knew. But I just couldn’t. So much to say, I wouldn’t know where to start.

Then I stumbled across this comment, and it changed my perspective.

Speechlessness then wasn’t just my emotional response, it was a common one. I wasn’t alone! I read some more around and started to realise just how many people felt the same way about the film, and many others also about the book.

ii. given the speechlessness issue, I had to find a way around saying the ‘unsayable’.

when all else fails, all we have left are good old bullet points. Let’s fire off.

ii.a –> love is such an explosive mess. It tortures you, it obsesses you, comes back over and over again and you chase it, push it away, call it back, beg to stay, believe you can live happily if you can keep the happiness part and give up all the rest, love itself included. It also sends you to heaven, makes you a nobler person, but also a miserable hopeless fool. It’s all you ever needed, all you were looking for, and all of this unbelievably consists of the mere existence of a single person. And somehow, somehow – Timothee Chalamet can find a face, a gesture, a tilt of the head for each and every one of those emotions. I am honestly amazed by this young actor, and all the modest self-awareness coming across from his interviews.

“I was flabbergasted,” Aciman said. “He was able to capture all this internal monologue on his face. You know exactly what he’s thinking. The comfort he feels, the faith, the nostalgia.” (Source: The Seattle Times, Nicole Brodeur, Febr. 23, 2018)

Joanna Di Mattia has written some beautiful reviews on the film, and surely the most comprehensive about Mr Chalamet’s acting magic.

The two protagonists hit it off as if they’ve always meant to, they seem to be born to be in this film together, to create this supernatural entity that is this Oliver-Elio couple that we must believe is a true pair of people just living a few parallel universes away. 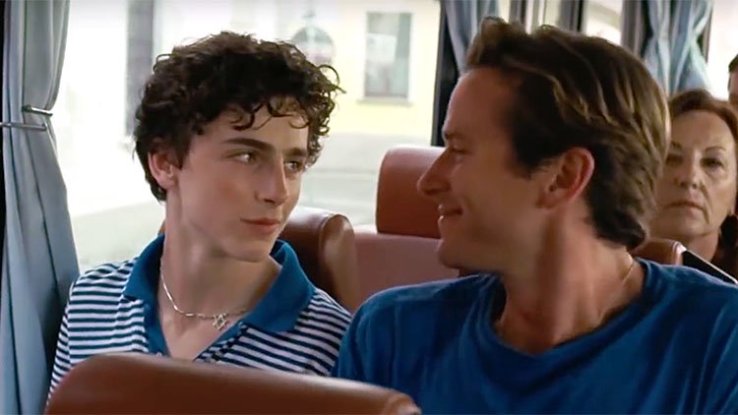 ii.b –> the unbearable lightness of the CMBYN universe. The choice of music. Sufjan Stevens has written two songs for this film (Mystery of Love and Visions of Gideon, while Futile Devices was added to the soundtrack from one of his albums), so perfect and delicate, bursting with both gratitude and regret at the same time, because isn’t love pure contradictory nonsense?

“oh, woe is me
The first time that you touched me
will wonders ever cease?
Blessed be the mystery of love”

I loved the choice of Ryuchi Sakamoto (‘M.A.Y. in the backyard’ among others). Hallelujah Junction by John Adams is such a joyful piece. This, as most of the piano pieces played by Elio, I have found beautifully charged with all the trepidation, melancholy and expectation of a human heart who discovers the emotions of love for the first time.

And then “Une barque sur l’ocean” version by Andre Laplante. In the scene by the war monument – an admirable 10-min take flooded with light – I loved how the music would start every time Oliver disappeared, only to be silenced again when he was back in the scene. I thought it was a poetic way to make that music express the very inside of Elio’s dreamy mind, drenched with love and desire.

The Photography and Screenplay. That somewhat golden vintage overtone of the photography (DoP Sayombhu Mukdeeprom), the early 80s in Italy so well reconstructed (the music from the radio at the time, in those exact months: Loredana Bertè’s J’adore Venice, Franco Battiato’s Radio Varsavia, the elections billboards and old newspapers in the newstand), a soft breeze of the 70s still in the air, and those words, all those words from James Ivory’s beautiful screenplay. The details. The camera resting on that shirt on the floor, on Elio’s journal, from which we have a glimpse of his thoughts about Oliver, the copy of the Fragments by Euraclitus and the thoughtful quote about the passing of time/impermanence of things, the copy of Armance by Stendhal being read by Oliver. (Armance is a gay love story which holds many analogies with our story here). The tale read in German that offers one of the iconic quotes from the film (and book) – is it better to speak or die?

ii.c –> The heightened romance of a gay relationship in the early ’80.  The unsaid, the fears, the ‘hidden-ness’, they all come into play in a gay relationship of the early ’80 in Italy, all the more if we think neither of the protagonists seem prepared to react to the sudden reality of their attraction to each other. The difficulty in acknowledging, accepting and then expressing their feelings make it all the more thrilling when they eventually embark in a romance, however short it be. And yes, the time limits also add to the heart-rending intensity of their union.

ii.d –>I am grateful for the existence of  a novel behind this film, because I needed to sit with this story for much longer, and this book isn’t just wonderful, it is truly one of the best I’ve ever read. Much has been written about this too, and I’ve found utter solace in sharing some thoughts with equally enthusiastic people. The most comprehensive reviews I’ve read about Andrè Aciman’s novel were published by the New York Times (“Suddenly one summer”) and Little White Lies (“How Call me by your name became a Queer literary phenomenon”).

iii. the nature of the dark matter.

I’ve also read about how Andrè Aciman has reacted to the way his novel has strongly affected so many people. In his words “CMBYN doesn’t change you, it gives you an insight into what was happening to you.”

And it must have been this insight, the dark matter that was being turned over in the bottom- half forgotten chambers of my heart, and now unraveling – remembrance of a well known fact: the experience of love is essential and somewhat unutterable, because it contains a quantum of divinity. This is what I’m grateful for, because it reminded me of the importance of honouring this awareness – isn’t it a duty towards existence – to look for the absolute and ideal and keep looking, again and again, against all odds. Also, thanks to Anders Furze’s review for finding the right words here: “I will spend the rest of my life chasing the heightened emotional register of this film.”*

*I normally receive Anders’ essays by newsletter, and was unable to find a link to his actual website. If someone knows it and can flag it to me I’d be most thankful!

2 pensieri riguardo “Call Me By Your Name, or How to overcome speechlessness and unravel Dark Matter.”